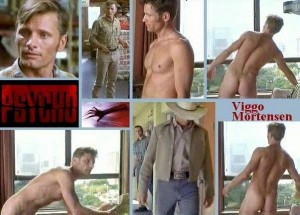 Viggo Mortensen got his big break in “The Lord of the Rings” trilogy and then later starred in “Eastern Promises”.  During the 1990’s Viggo played several smaller roles including his spot on “Psycho” where he gets completely nude and shows off his tight ass.  Since then, he’s shown some more nudity and you can bet your ass you will see it here.