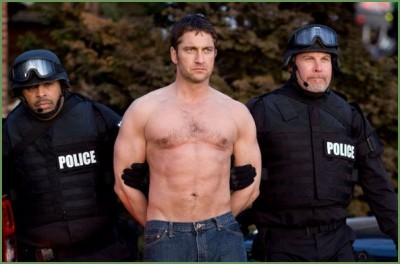 Gerard Butler gets shirtless and briefly nude in his new movie “Law Abiding Citizen”.  From what we are hearing, the movie is good, but the nude scene sucks.  It is dark and hard to make out his firm ass in the clip.

Gerard Butler has that furry bear kind of sex appeal with his frequently bushy face, hairy chest and overall imposing, ripped body. He’s in the celeb gossip rags right now with rumors he’s dating Jennifer Aniston. They’re filming The Bounty right now, and he did say he’s “happy as a pig in shit.” He’s also got a flick out with Grey’s Anatomy’s Kathering Heigl called The Ugly Truth.

Jennifer, Katherine, whatever. He’s just hot. Especially in the movie 300 when his body was so incredibly ripped I spent so much time staring at him I don’t remember what the movie was even about.